The key components of a minimalist's charging kit

Universal travel adapters are bulky. We’ve got a USB cable (if not two) for every device we own, and power cables with a single-country-plug-type are unavoidable intermediaries. I wrote this post because I often found that while one-baggers are quick to offer advice on how to shed that extra pair of jeans or which well-rounded pair of shoes to buy, we rarely address one of the sneakier aspects of living in the modern world: charging things.

Things stack up when you’re not looking

Even as a one-bagger, the things we don’t necessarily pay close attention to have a funny ability to multiply when we aren’t looking. One nomad I chatted with once mentioned finding some dozen USB keys he didn’t know he had when emptying his bag out to clean it - apparently he just kept forgetting they were there, and bought more. I generally thought myself to be avoiding similar situations by regularly taking stock of my things (creating the packing list section of this blog helps with that). However, after my latest inventory, I realized I’ve been glossing over one thing in particular - my bag of charging supplies. I’m embarrassed to admit that it had gotten a bit out of hand. 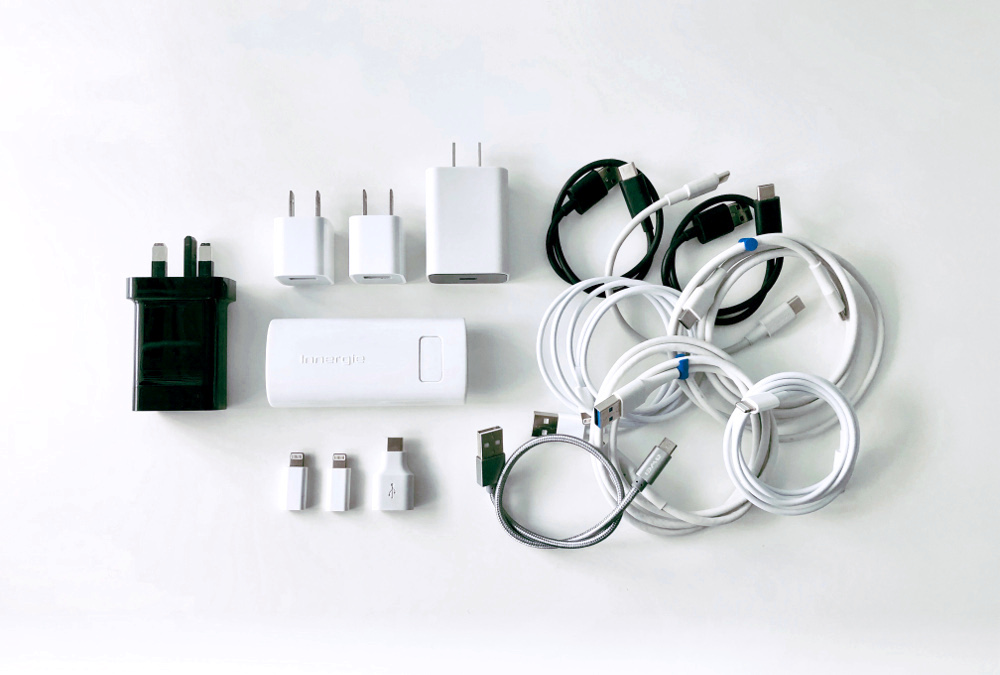 And as I later discovered, this wasn't all of it.

I can partly forgive myself - I’m a software developer, after all, and travel with more than a couple electronics that need plugging in once in a while. After counting properly, however, I decided there’s just not much excuse for a self-declared minimalist (myself) to have three duplicates of the same 1m USB cable… and one cable for a device that I don’t think I actually own.

While we could make the argument that it’s wasteful to give up potentially useful, functioning things that we might need later, I’d caution against this thinking as that way lies a slippery slope. There’s a plethora of things I might need tomorrow - they don’t all fit in any bag I’d want to have to carry. Instead, I’d address wastefulness by doing something useful with the item I’m giving up - donating it to a local charity, usually, or experimenting with giving it away.

Leaning out my charging supplies

I did still have the practical aspects to address in terms of my charging set up. I travel frequently to different countries, so plug adapters are a necessity; and I have several different electronics to charge, so different USB charging supplies are necessary. As always, I prefer any gear that helps me to travel with a compact, light load, and I don’t mind investing in quality items that are likely to help me do that for a long time.

After some thought, I came to the conclusion that an ideal minimalist charging set up has three main components:

With that in mind, I got myself a super lean, minimalist charging set up. It’s just five components and charges all my electronics in every country. 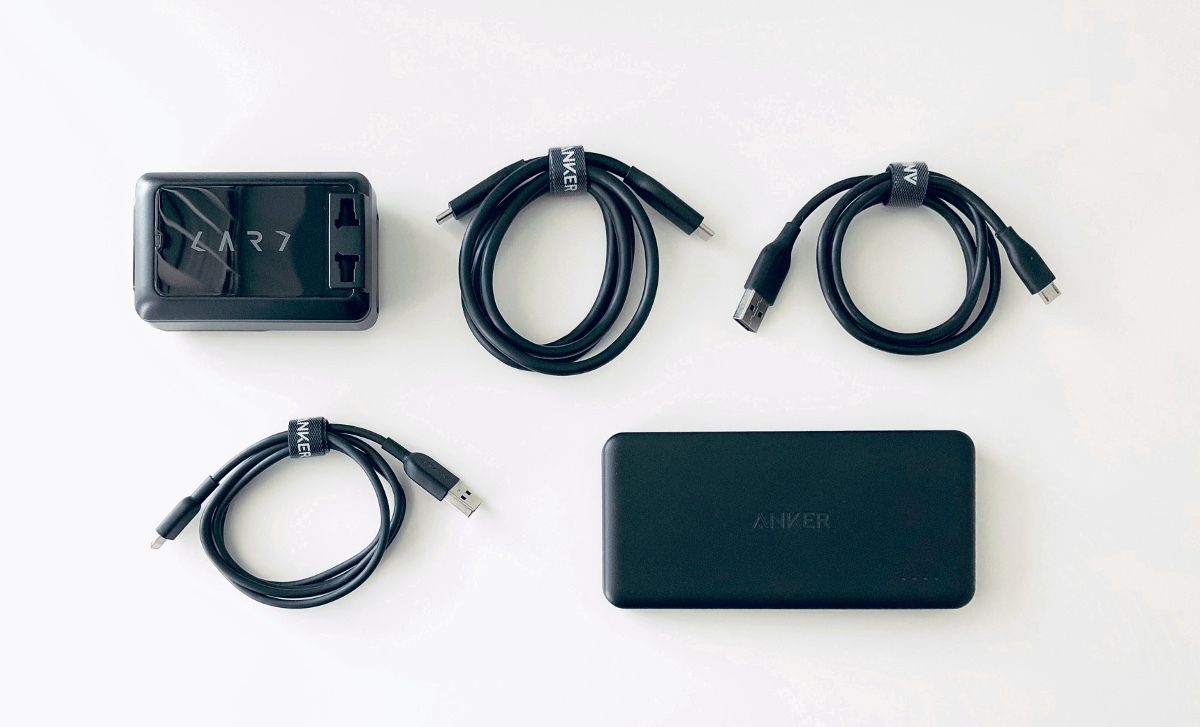 My new minimalist charging set up consists of:

It charges all my electronics, which are:

Not a bad ratio as far as I’m concerned!

Most important: a universal travel adapter and USB fast charger in one

It always baffled me that so few solutions exist for international travel when it comes to adapting to wall outlets. Until now, I’d only ever seen kits of 4-6 single-plug AC adapters that required their own bag to keep together, or large and bulky all-in-one universal adapters with different pins that slide in and out. Perhaps the closest to a real minimalist adapter I’ve seen would be the Road Warrior Adapter, which has a pretty small footprint. However, its function is limited since it doesn’t sport any USB outputs. Plugging in an additional AC-to-USB charger to the Road Warrior adds a bit more bulk and distance from the wall than I’d prefer.

I was pretty happy to find the CARD Travel Adapter 4-Pro. Not only does it plug in anywhere, it provides a 45W USB-C output that can charge my laptop, and three other USB-A outputs that will fast charge my iPhone and other devices. For my camera battery charger, there’s a front-facing universal socket. It packs a lot of utility into a small, slim package, and weighs just 155g. 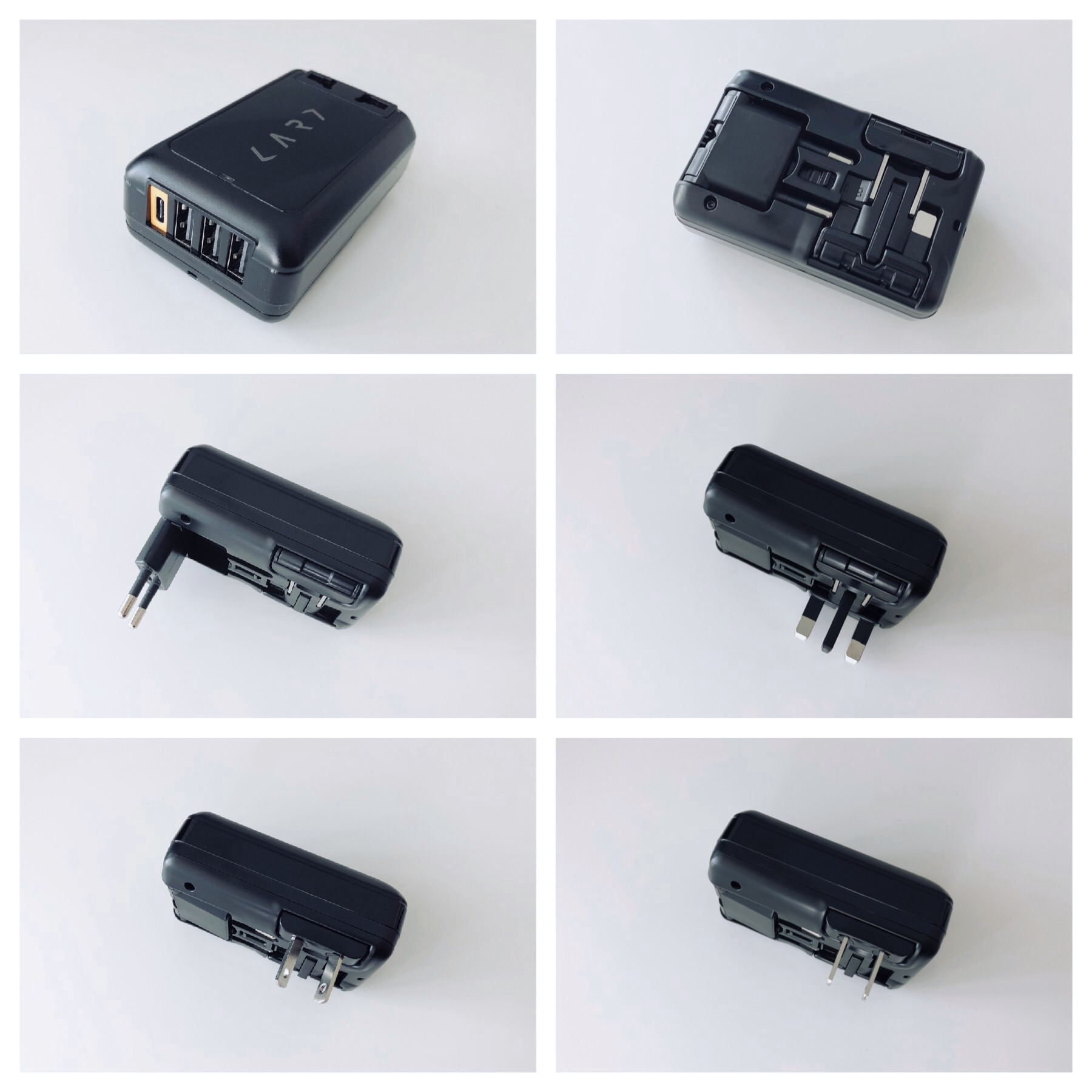 For more photos and an in-depth review, read this post.

Cheap cables are widely available, but their low cost often comes with compromises in quality and durability. By the time you’ve replaced your third one after it either stops working or the covering fails, you may as well have spent your money on a higher quality and more durable cable.

I’m a fan of Anker. Their customer service has been top notch, and they make good-looking and durable electronics. I’m especially impressed with the lifetime warranty they offer on their PowerLine II Lightning Cables. I wish this warranty extended to their other cables, but 18 months is still nothing to shake a stick (or cable) at, and a much better offer than the 12 months (if at all) you’ll get from most other suppliers, including Apple. 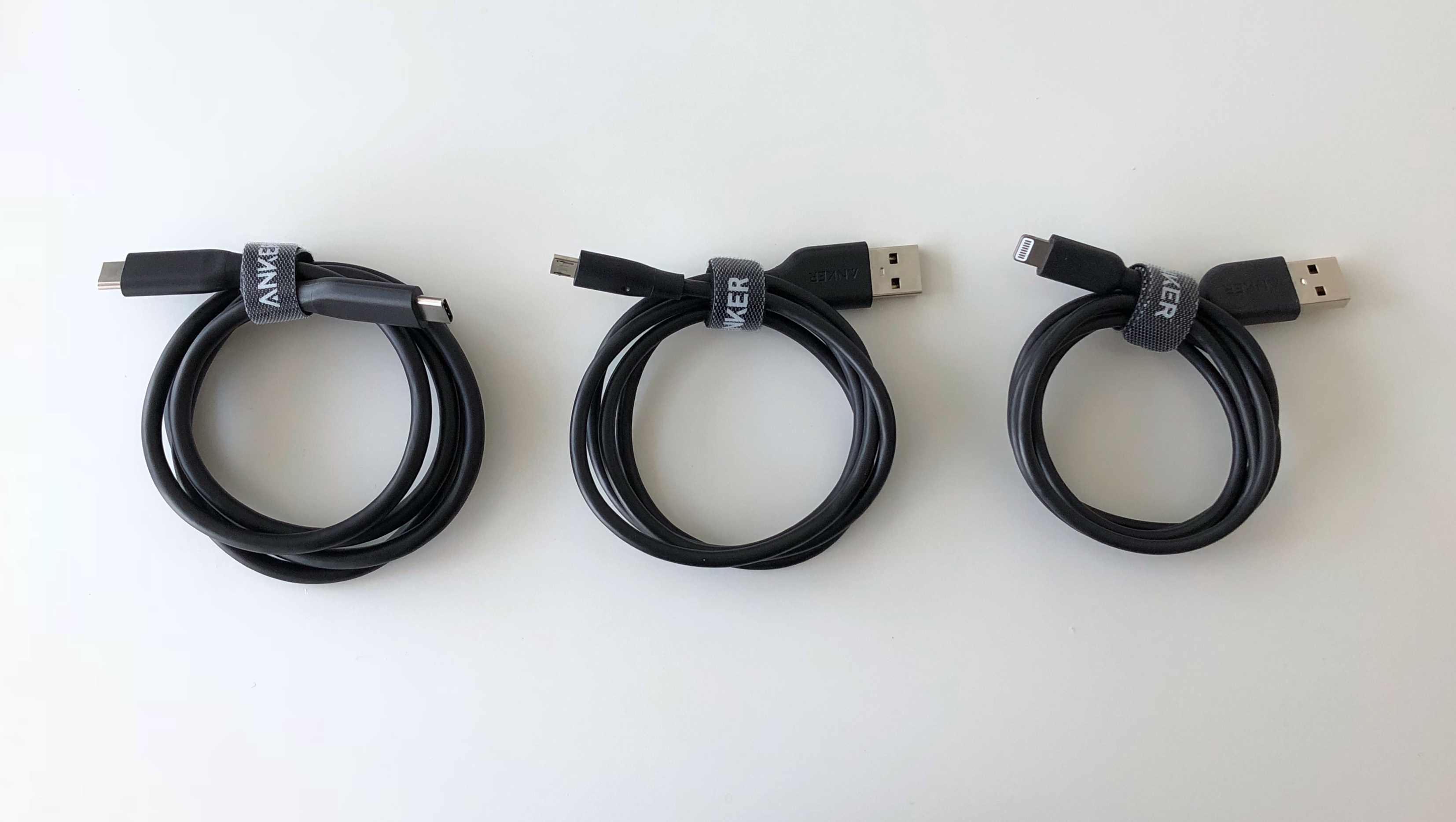 From left to right:

Each of the cables I chose is 3ft, or almost 1 metre long. When it comes to cables, I’ve come to conclude that having fewer, longer, higher-quality cables is the most sustainable minimalist approach. Having one cable for each type of USB you use will cover your needs without excess. The only exception that I can think of would be having two of the same type of device that you frequently charge at the same time, in which case, two of the same cable is not unreasonable. Just be aware that plugging two devices into the same charger at the same time usually reduces the output that each device receives, because the total output of the charger is shared between the devices. If it’s a fast charge you’re after, you may get better results charging your items one at a time.

A single long cable covers a variety of situations, and is less bulky in total than having more cables of different lengths for different situations. Anker PowerLine II cables come with a well-made hook-and-loop fastener strap to keep the cable tidy. Alternatively, you can repurpose stretched-out hair ties or rubber bands as a super fast cable tie. I posted some photos that show how in my post about inexpensive travel items.

A powerful and lightweight portable battery

If your travel is mainly through major cities, a power bank is one of those items that you might carry around for weeks and never need to use - until the day you do. Whether it’s finding yourself in a busy cafe when all the outlets are taken and you’re down to %15, or boarding your 8-hour flight to discover that the USB outlet at your seat doesn’t work, you’re bound to find yourself in a situation where having portable power is suddenly more than worth the effort of carrying it around.

The sweet spot, of course, is being able to have a lot of power without a lot of weight. For my ideal solution, I again turned to Anker. They make the Anker PowerCore II Slim 10000 Power Bank - a beautiful, slim power bank that I can hold in one hand while holding my phone. It packs 10,000mAh into just 210g - enough to fast charge my iPhone 8 more than three times over. 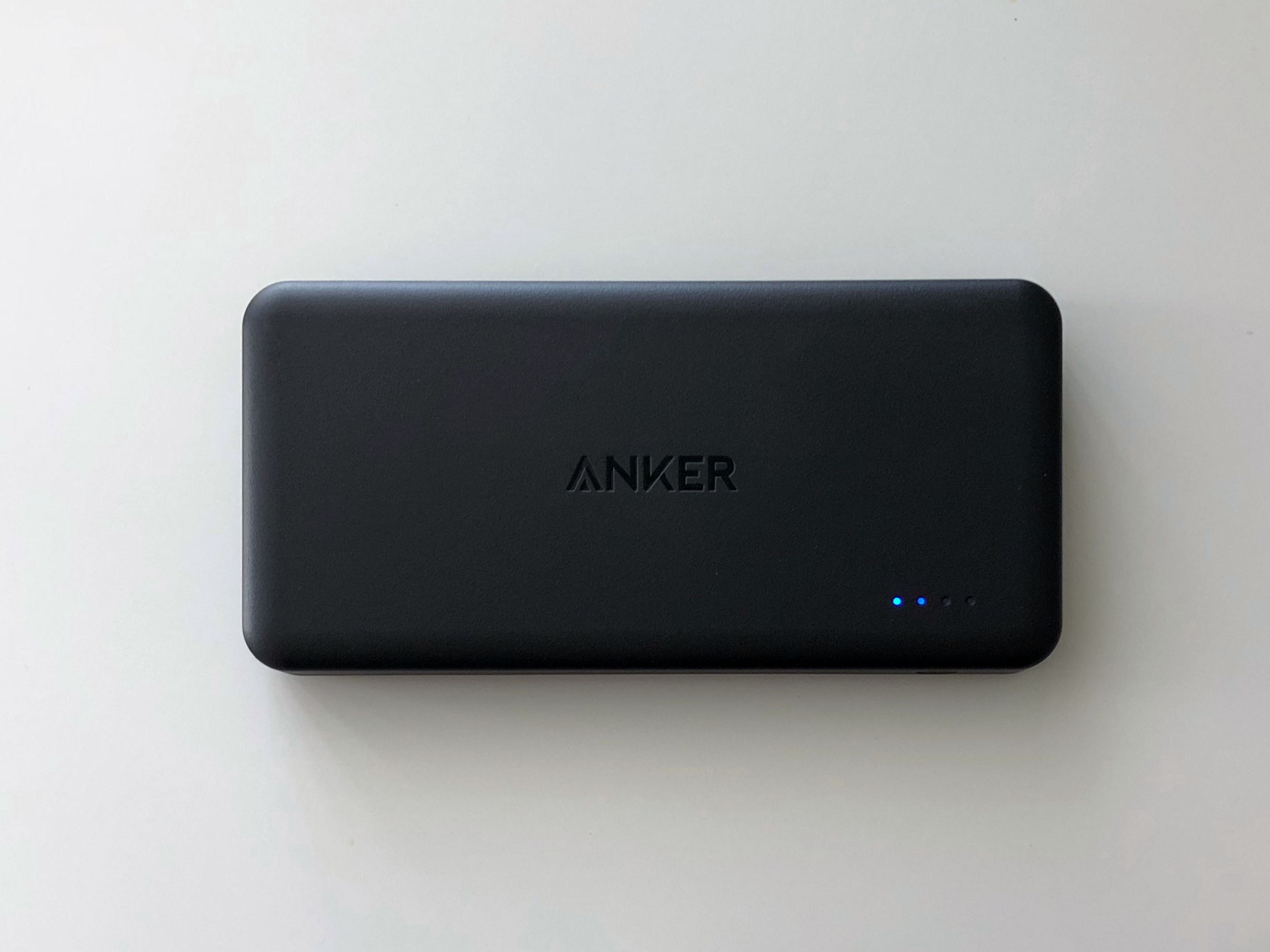 This is a minimalist’s portable battery. All power, slim and sleek, no fuss. For more photos and an in-depth review, read this post.

Nov 18, 2018 update: Anker recently released the Anker PowerCore Lite 10000mAh, a similarly sized portable battery that’s slightly smaller with an upgraded grip texture. Most importantly, it has the option of a USB-C input (for charging the battery, only). If you already use devices with USB-C, this can further help reduce the need to carry extra cables!

Even with a new charging set up, there’s nothing to prevent things from piling up again if I don’t continue to pay attention. Charging clutter could accumulate if I forget I already own something and buy it again, or by acquiring new cables and chargers when I buy a new device, or by some inexplicable force of the universe that seems a direct opposite effect to losing socks in the dryer. For these reasons, I’ve moved from storing my charging kit in an opaque dopp bag to keeping it in one of my Minaal packing cubes, which has a mesh top, and is made of a grey nylon. It’s much easier to see my (all black) cables and chargers in this storage configuration, which should help to keep me aware of what’s there.

After revamping or whittling down your charging set up, I think the highest contributing factor to keeping your kit lean - like with minimalism in general - is simply to pay attention, and not let things stack up.

40 hours drive time: my road trip charging essentials
Climbing Mt. Fuji with one ultralight bag
My most unexpected lesson of 2018