My first zero-bag trip and why it was important

I’m grateful to be fortunate in a few ways, but the one lucky bit currently on my mind is that I like to write. Generally, and especially when it comes to this blog, I try and write about things that seem important. I can certainly pound out mindless marketing drivel at ~90wpm as I did for a grueling six months in one particular job, but I never thought that was important (though I lied at the interview and said I did). In the years since calling that my profession I’ve learned some things. One of those things is not to lie at job interviews because even if you do get a job you don’t like, you will not be able to sustain it day-in and day-out. Another thing I’ve learned is that writing words that do not seem important is like eating at Taco Bell. It might seem like a good idea before you start, there’s no actual discernible benefit other than a temporary dopamine hit, and even as you’re doing it you find yourself wondering why.

I try and write blog posts that, at their most unsuccessful, will at least entertain. If they are a little more successful they might point you towards an object or idea that can be of use to you. My most successful posts will do both, and if I’m really on a roll, without any spelling mistakes. If I have an idea for some writing that will do none of those things, I don’t write it.

Sometime before the new year I had the opportunity to visit a beautiful landmark someplace close to my old hometown, the beautiful capital city of Toronto, ON. (There’s a joke in there for my Ottawa friends.) I went to Niagara Falls for a two-day, one-night trip. Being in a particularly minimalist mood as I decided what to pack up in my bag for the trip, I had a thought that sauntered into my mind, sat down, and refused to leave. It was: “All right Miss Fancy-Pants one-bagger, how about a real challenge? Don’t bring a bag.”

Since in my general experience the thoughts that refuse to leave are the ones that turn out to be important (even if at the time I don’t know why), I decided to listen to it. So aside from the items I take with me daily (wallet, phone, headphones, power bank), here’s what I brought for the two-day, one-night trip. 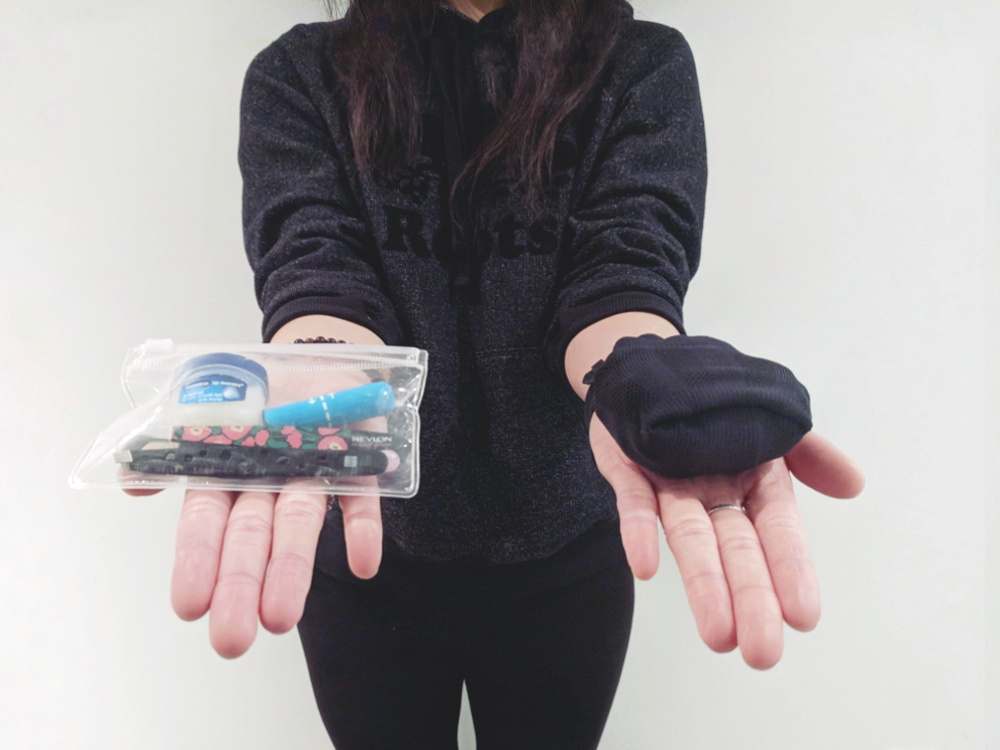 All I see when I look at this is how huge my fingers look.

I’m holding a little zip pouch with some lip balm, tweezers and cuticle trimmers (because all those things are annoying to not have on hand), and a just-in-case tampon. In my other hand is a pair of balled-up socks with some underwear tucked into the middle. These items went into the pockets of my Uniqlo down jacket, the jacket went onto me, and I went to Niagara Falls. 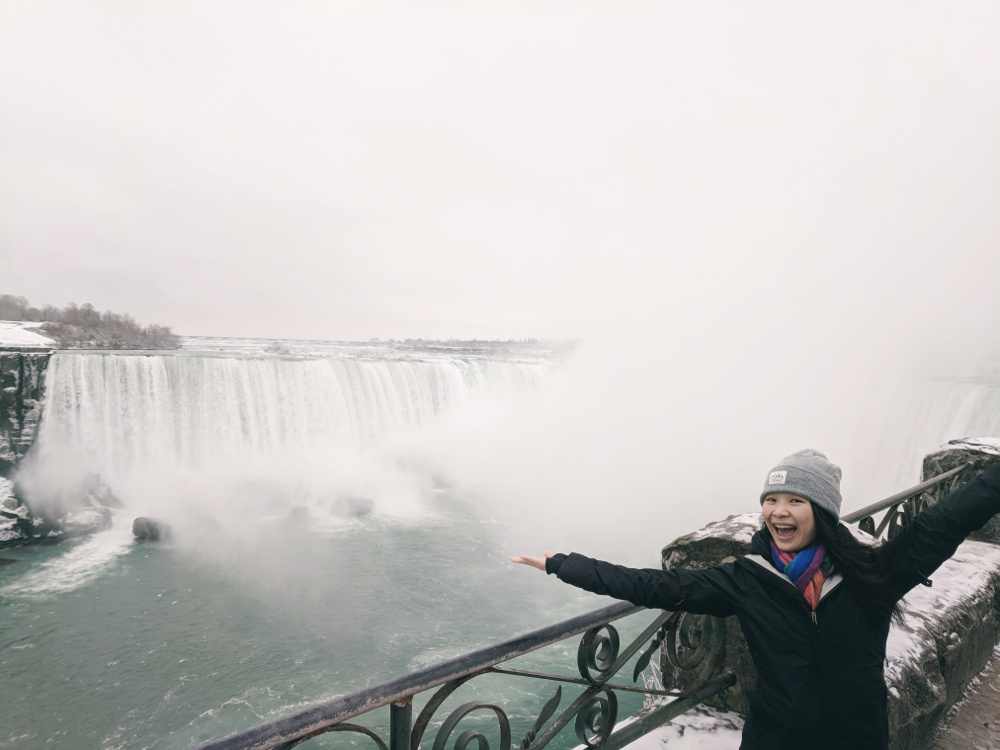 It was cold. I was unperturbed.

I know, you’re thinking, “But what about X?! How did you Y?! What did you do for Z?!” Well, I made some assumptions. The plan was to stay in a hotel. Since Niagara Falls is a city that inexplicably exists almost solely for tourists (and once long ago was a terribly bloody battlefield that soon after became a tourist attraction - but I digress) I figured the hotel room would be well appointed. I bet that there would be a toothbrush available, and soap to wash with, and probably skin lotion. The latter two of these assumptions resolved in my favor. There was mouthwash, at least.

I intended to wear most the same clothes on both days, aside from the change of socks and underwear, and this went fine. In fact, aside from the discovery that I never again want to go longer than twenty-four hours without brushing my teeth, I wasn’t really put out by not having more stuff with me. Actually, it was quite the opposite. Not having any bag at all made me feel quite like a kid at recess, freshly unshackled from the norm and wanting to run around just for the heck of it.

This was all some months ago and it’s taken me until now to write about it, mainly because I couldn’t decide why it was important. I figured it out earlier today during an altogether unrelated moment, listening to an audiobook at the gym. It was The View from the Cheap Seats by Neil Gaiman (my favourite author and a constant inspiration). If you happen to be at all interested in writing or observing life or breathing I highly recommend it. He speaks at one point about writing things to find out what it is he thinks of them. I had minimalism in the back of my mind and something fell into place. Like with the trip to Niagara Falls, and more importantly, in general, I experiment with doing without so I can discover what it is I really need - and to go a step further, to find out whether or not I have the fortitude and resourcefulness to do without anyway. It’s how I came to nomadism and traveling with one bag in the first place - by experimenting.

It’s all too easy to be on autopilot, doing things a certain way because that’s the way you’ve always done them. It’s a refreshing and informative experience to, just for the heck of it, try something that for you is completely unusual. It doesn’t matter if it’s about doing without, though it’s almost certainly guaranteed to make you feel uncomfortable, temporarily. It doesn’t have to stick, but it might. At the very least, you’ll learn something about yourself that you wouldn’t have found out otherwise. And that’s why it was important for me to take a short trip with nothing more than what fit in my pockets.

Next time, though, I’ll bring a toothbrush.