Lessons from 300+ days with one bag

Since then I’ve been working for myself as a developer, picking up new skills and a whack of new experiences along the way. My luggage has ranged between 40L and 70L in total, but always in one carry-on size, and sometimes, one “personal item” size bag.

It’s not always been comfortable or easy, but I can confidently say it’s the best year I’ve so far had. I’ve easily gotten more living out of these past 300+ days than I ever would have expected. I’ve learned more about the world and about myself than I ever would have if I hadn’t gotten on that plane. I’d like to share how I’ve been doing it, what I had to give up, and why it was more than worthwhile.

The first part, the hard part

I’m homeless. Literally. I have no full or part ownership of any dwelling, anywhere. I also have no mortgage, lease or rent payments, rooms to renovate or repair, home insurance requirements, property taxes, lawn to mow… You get the picture.

“The things you own end up owning you.”

If only it was so easy as blowing it all up in a gas explosion - quick and painless! I’m being facetious. The hardest part of going full-time one-bag is accepting that you are not your things. It sounds like a line from a movie but it’s far more ingrained and ubiquitous than I first realized. Even after discarding anything I deemed superfluous - clothing, decorations, extra toiletries - the things I owned were nowhere near fitting in even a large suitcase. The major part of my heavy, unwieldy belongings were 100% sentimental keepsakes.

From the time I was a young girl I’ve kept journals. Diaries, sketchbooks, novels-in-progress. I amassed a boxful of them. At any point I could open one and be transported to a long-forgotten memory, like magic.

I threw them away.

I took pictures first, of course. I photographed every page, and made backups. And a hard disk full of images is a lot more portable than a bin full of paper.

The hard part, the important part, is recognizing that what you’re attached to isn’t the item itself, but the emotions and memories that it stirs up. Photos will do. They’ll remind you of the past without chaining you to the weight of it.

Of course, I have souvenirs. I still buy things that I want. The biggest difference is a truly life-changing additional consideration: if I own this thing, I’ll have to carry it every day from now on. Is it worthwhile?

Not only does this consideration end up saving me some money, but it has also made me much more aware of the effect of consumerism in general. Things that once seemed like a “really neat idea, I should get one” are now obviously unnecessary. It’s not even a feeling of “I can make do without this thing” - it’s more like, “I already have a tool for that job.” My resourcefulness and ingenuity is more often exercised and, I think, improved. I can’t say that I’ve really ever wanted for anything, except maybe the temporary high that comes from getting the newest, shiniest version of a thing. The longer I spend not chasing that, though, the more I realize how unimportant it really is. There’s far more fun to be had elsewhere.

Like consumerism, many of the conventions you might be brought up to accept, like needing to find steady work in order to save up for retirement - I’ve come to realize that they aren’t actually necessary. I have a safety net of living expenses, sure. That’s just smart. I don’t plan to ever retire. I’ll always be doing something that pays me - but on my own terms, at my own pace. I’m semi-retired right now. I work when it’s something I’m passionate about, and as a result, I do better work. I contribute more. I’m fulfilled.

A few of the things I’ve learned, in no particular order

Looking at me, you’d never know

I’m not a penniless backpacker. I’m grateful to be able to afford to stay in decent rooms with nice beds and private showers. I mostly stay in Asia. It all amounts to less rent than I’d pay for a month in most major North American cities.

The most obvious outward sign is probably that I tend to wear a lot of the same black tank top. (I have four of them.)

Is it worth it?

I went on a road trip through the freezing but astoundingly large Monument Valley, sometimes driving with half the car in Utah and the other half in Arizona. I walked on the red sand through Antelope Canyon, which is a truly beautiful place. I stood on that cliff that faces Horseshoe Bend, under the impossible formations at Arches National Park, and the next week walked on the rim of the Grand Canyon. During it all I felt ridiculously small. 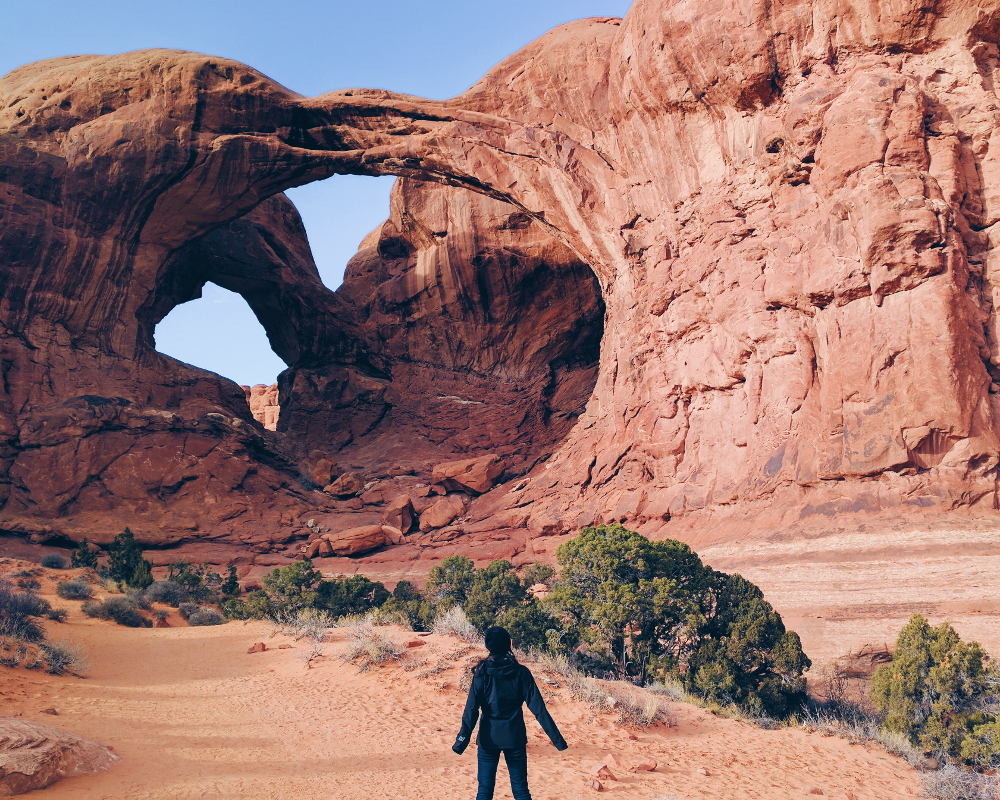 I toured the 555 USS Dolphin, the deepest diving submarine in the world in San Diego - on the same day, as it happened, that its now retired crew came to visit. I heard their stories, with fresh memories brought on by their old cabins and consoles. I got lucky.

I fulfilled a lifelong desire and made the trip to Japan - twice. I took selfies with friendly deer in Nara, marveled at multiple storey wood temples built without nails, and strolled under trees laden with cherry blossoms amongst hundreds of picnic-ing families. I slept on tatami mats in a traditional room, visited an ancient poet’s teahouse, and climbed all the steps under the famous Torii arches at the Fushimi Inari Shrine.

I went to Thailand and trained mere meters away from famous Muay Thai and MMA fighters. I lived poolside at a luxury resort for less than what some people spend on coffee in a month.

I went cafe hopping in Singapore, Kuala Lumpur, Tokyo, and Vietnam. I learned that my most favorite cup of coffee is made in Ho Chi Minh, or by family-run Korean coffee shops in any of those places. I learned that good coffee requires no sugar or milk.

I don’t like to call myself a digital nomad. So many of those I’ve met who go by the term are trying to sell something, and swear by working all day on the beach. That’s not me.

I’m definitely a one-bag nomad. You could fill a house with all the things I do without, but you can’t contain the freedom I have.

"How do you afford to travel all the time?"
"How do I start...?"
My first zero-bag trip and why it was important