Mountain climbing isn’t in my usual repertoire, so it wasn’t very worthwhile to go drop hundreds of dollars at Montbell before the 20ish hour journey. So, not entirely on purpose, I ended up climbing my first mountain with a loadout I now understand to be considered “ultralight.” Whoda thunkit?

Here’s what I packed, how it went, and what I wish I did differently.

Fuji San is not by any means a tough climb, as far as mountains go. At no point do you need rope or a harness. The most technical parts are akin to scrambling over a big pile of rocks.

A lot of the ascent is basically a tough, steep hike. The most challenging bits for me were where the ground was covered with very loose gravel, and for every step you took you slid back halfway. It’s more taxing than you might think because of the thin air at higher altitudes - it was necessary to stop every few minutes to catch my breath.

I was concerned about the cold at higher altitudes, but at the time of year I climbed (late August) it wasn’t really that bad when I was moving around. For most of it I only wore the gloves to protect my hands, and the buff to keep from breathing in too much dust. Around the start of the climb when you’re in the clouds, it’s a little cool. I wore my flannel. 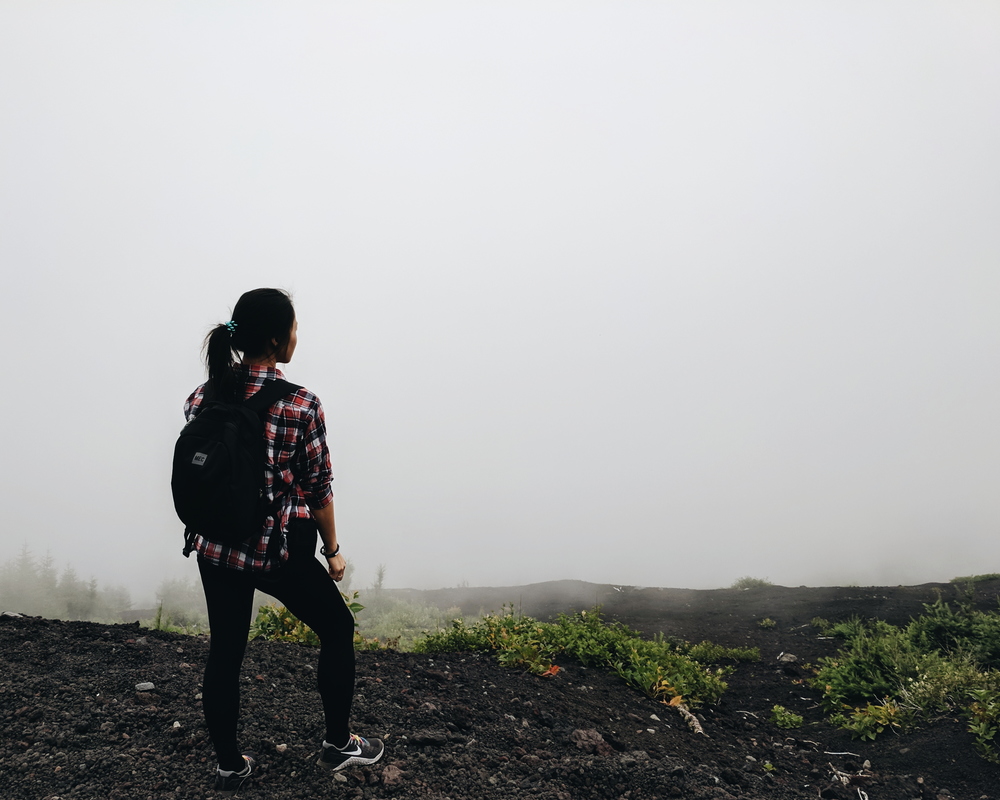 It's me on Mt. Fuji, but you'll have to take my word for it.

You can rest (read: try to sleep) in the mountain huts overnight with reservations in advance. You get a sleeping bag, so it’s not too cold, but the accommodations are modest, without showers or much personal space. If, like me, you want to reach the summit by sunrise, you’ll only stay a few hours anyway. 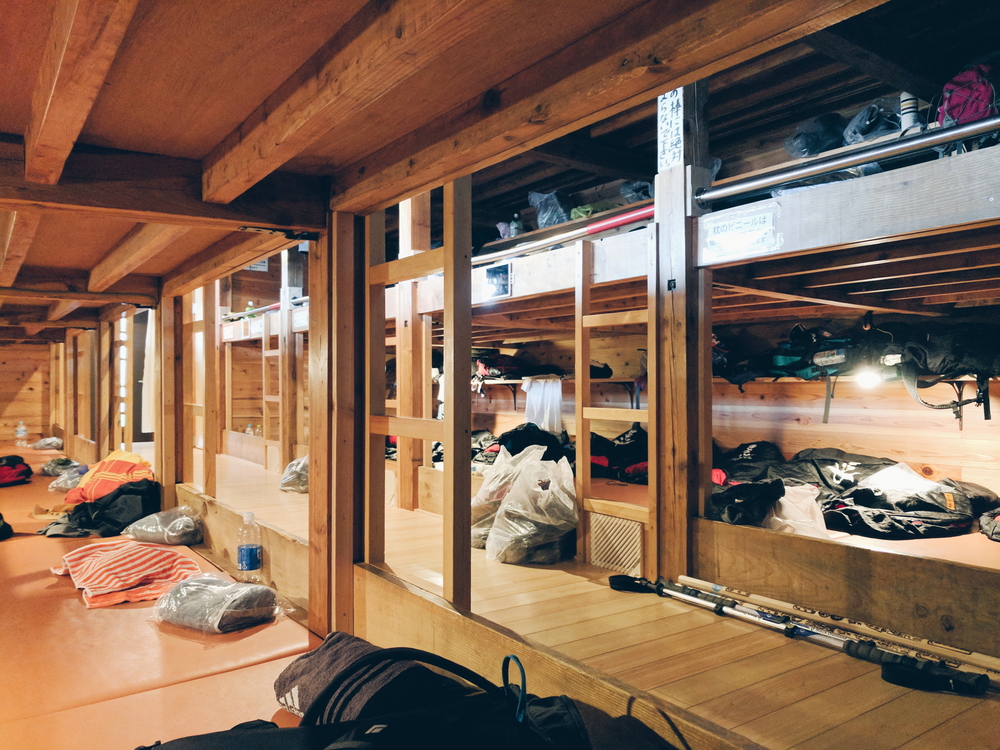 The early morning ascent to the summit was crowded. What is supposedly a 2-3 hours trek turned into more like 4 hours on account of standing in line for the majority of the way there. Hundreds of people try to make it by sunrise, and the parts of the climb where it bottlenecks slows everyone to a halt. Standing still in line is the only reason I really felt cold during the whole trip! That said, some of the most fun climbing for me was just before the summit, where it’s more like rocky ladders.

Once you do reach the summit, it’s also super crowded. I did get to watch the sunrise though, over the heads of a few hundred cold people. 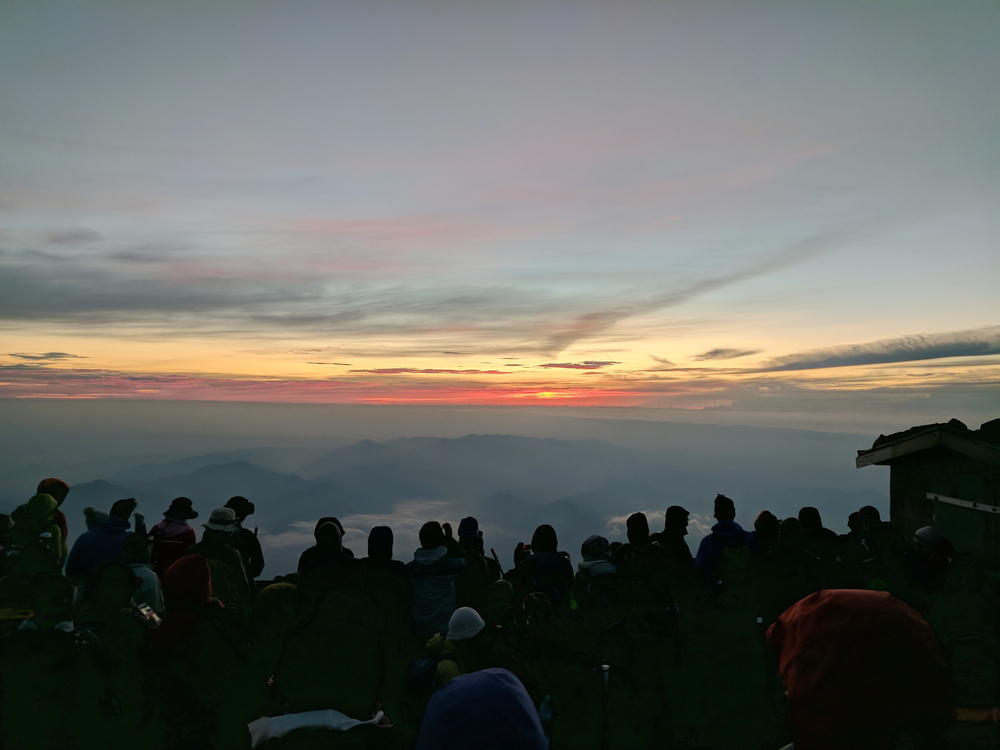 It was nice, but not exceptionally worthwhile.

Once the sun did come up, it both warmed and prettied up considerably, though. I would’ve liked to have spent some more time at the summit (they sell hot cocoa up there!) but started heading down after about 20 minutes so as to avoid much of the lingering crowd.

The descent was without a doubt the most challenging part.

You wouldn’t think so at first glance - it’s basically a switchback all the way down, with moderate incline, and no rocky ladders. It’s the gravel and dust that really make it tough. Almost every step had me sliding, raising dust that gets absolutely everywhere, especially in your eyes, which doesn’t help watching your step. It’s really easy to fall and injure yourself, especially if you’re already tired from the ascent. 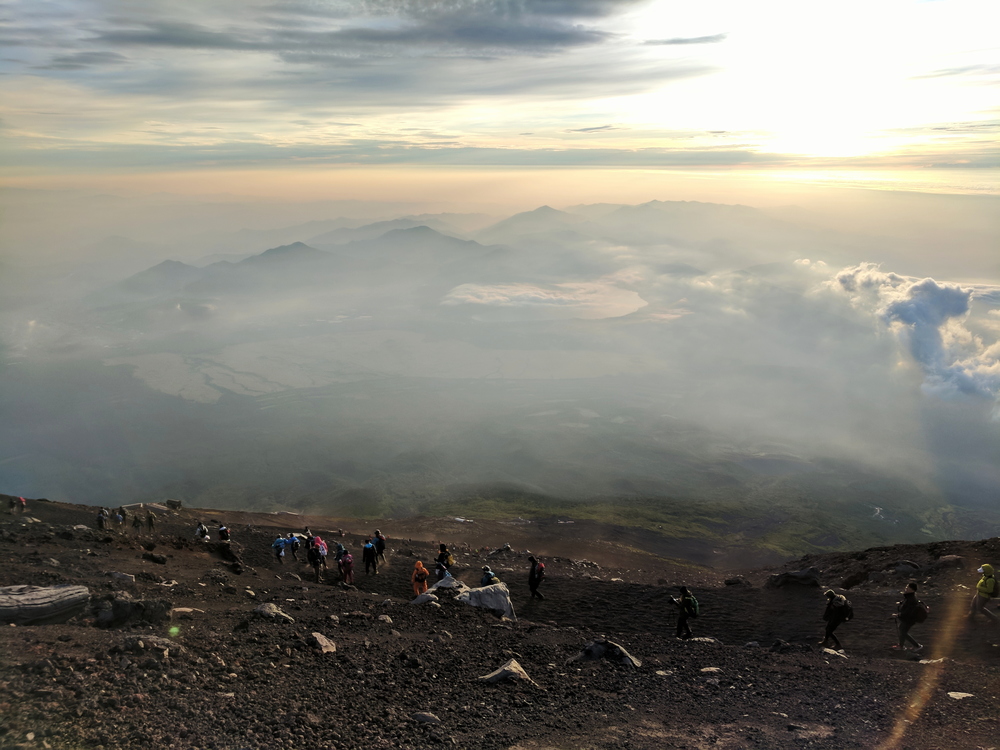 What I wish I did differently

If I did though, here’s what I’d do differently.

Even going ultralight, I felt I overpacked for my first mountain hiking/climbing journey. In hindsight, in temperatures that (at the time) didn’t go below zero, I would’ve traded being cold for having more water at hand. I also would’ve invested in a good pair of hiking boots, even though I only planned to use them the one time.

The one bag: what I've learned from 38 trips through airport security
40 hours drive time: my road trip charging essentials
"How do I start...?"